“I need you.” It was her voice, rough and pained, but it wasn’t Saira who spoke. The speaker towered over Faris, a bloody axe clutched in one hand. Sharp teeth gleamed as the gnoll burst into laughter—a mocking, fluting cry that was quickly echoed on all sides as others stepped out of the woods. The moon broke through the clouds just in time to catch the blade of the gnoll’s axe as it rose and fell, silencing Faris’s cries.

Gnoll legends trace the origin of their species to the demon prince Yeenoghu. Known as the Beast of Butchery and Ruler of Ruin, Yeenoghu sought to spread his hand across the mortal world by creating an army that would sow discord and terror across civilized lands. His demons numbered too few and could not remain in the mortal world indefinitely. But Yeenoghu took a few of his mightiest and most savage demons and fed them to a pack of mortal hyenas. The essence of the demons fused with the animals, and their children were the first of the gnolls—fierce humanoid creatures combining the traits of cunning hyena and vicious fiend. Yeenoghu charged the gnolls to spread horror in his name, bathing the lands in blood and bringing suffering to all things unfortunate enough to cross paths with the Children of Yeenoghu. Through this butchery, they earn a place of honour in the domain of the demon prince.

This is the tale gnoll mothers tell their pups and the story the scourge uses to exhort his troops. Whether it is truth or mere legend, it is easy to see the inspiration for the myth. A gnoll looks much like a humanoid hyena and shares many traits with the animal, including its haunting laughter. And the strength and savagery of these creatures is enough to suggest demonic blood; the typical gnoll band strikes without fear or mercy, tearing into enemies with the fury of fiends incarnate. The Soul of the Hyena Gnolls agree that Yeenoghu crafted their race from demon and beast. But not all gnolls worship the Beast of Butchery. Though the fury of the fiend runs through the blood of the gnoll, some reject this demonic heritage and find solace in the spirit of the hyena that lies within them. Over the course of generations, this has produced clans of gnolls that are less savage than the Butcher’s Brood. Such gnolls usually come to terms with the humans or other settlers who share their lands, and they might sell their services as trappers or hunters. Although they trade with members of other species, gnolls prefer the company of their own kind, along with their hyena companions. They do not take slaves, and while they do not kill peaceful humans who come to their camps, neither do they make them feel welcome. These gnolls are still predators and carnivores; while they are not quick to anger, a visitor to a gnoll camp would be wise to mind his manners. When dealing with these gnolls, think of how their primal nature might play into their personalities. A gnoll is more comfortable in the wilds than in a town. He is a pack animal and prefers the company of his kin to solitude. Like the hyena, he is content to scavenge others’ kills—but like the hyena, he is a hunter and predator, ready to fight if provoked. Scavenger Beasts Like the hyenas they resemble, gnolls have no qualms about scavenging the kills of other predators as a source of food. But for the gnolls, scavenging plays a deeper cultural role. The gnolls of Yeenoghu create little of their own; the vast majority of their belongings are things they have claimed from their kills. Few among the Butcher’s Brood have any gift for metalworking, and they rely on victories and heirlooms as a source of arms and armor. This creates an unusual aesthetic to gnoll armor, which is largely pieced together from multiple victims. Gnoll chainmail is rarely a single shirt, but rather strips torn from multiple corpses and sewn haphazardly onto leather; a single plate pauldron might be included in the suit. In part, this is a practical action.

The gnolls need weapons and armor for their bloody work, and the goods of their victims are better than anything they could make themselves. But there is also a social significance to it. The children of Yeenoghu believe that they were placed on the world to slaughter lesser creatures, and that their place in the afterlife is determined by their kills. The things they scavenge from their fallen foes are trophies of these victories. The gnoll who wears haphazard chainmail remembers the story of each strip of metal and enjoys reminiscing about each kill. Its patchwork armor is a map of its life and achievements. Some gnolls prefer less practical tokens; a gnoll might take a finger-bone from each victim, wearing these on bracelets or even binding them to the haft of its weapon. But almost everything a gnoll owns has a story—and almost all of it is scavenged. Devoted to Demons The common religion of the gnolls is the worship of Yeenoghu, the Ruler of Ruin. The gnolls of the Butcher’s Brood are fanatically devoted to their demon prince. They believe that his blood flows through their veins, and beyond this, that their devotion justifies every terrible atrocity they commit. The more philosophical among them believe that they were created to scourge the weak from the face of the world—that through their merciless destruction, they serve a higher place. It is this belief that gives the gnoll leaders their name: the demonic scourges who lead the other gnolls into battle.

Despite their devotion to Yeenoghu, gnolls have little interest in ritual, and few priests or shamans are among them. Their devotions are acts of slaughter, and any gnoll can consecrate a murder to the demon lord. They paint the eye of Yeenoghu on weapons and armor so he can see what ruin is wrought in his name, plus they howl his name in battle, and that is usually enough. However, a few clan leaders follow the path of the infernal warlock, drawing fearsome powers from their pacts with the Beast of Butchery. Guided by visions from Yeenoghu, these gnolls perform frightful rituals. One of the most horrifying is the Corruption of the Soul Consumed. Living victims are devoured by cacklefiend hyenas, who then swiftly give birth to litters of newborn demons—evistros or barlguras formed from the tormented souls of the victims. Those gnolls that turn away from Yeenoghu follow many paths. Some see the deities as being no different from demons, and they refuse to worship any higher power. Such gnolls seek to strengthen their bond to the natural world, searching for connection to a primal force deeper than they can have with any divine power. However, some gnolls have embraced the worship of the common gods.

Age. Gnolls rarely live past 30, but remain strong and healthy almost to the end.

Speed. *Your base walking speed is 30 ft.

Rampage.* When you reduce a creature to 0 hit points with a melee attack on your turn, you may take a bonus action to move up to half your speed and make a bite attack (see below).

Bite.* You have a melee natural attack that you are proficient in. It deals 1d4 + your Strength modifier piercing damage.

Languages. You can speak, read, and write Common, Gnoll, and Abyssal.

Subraces. Three subraces are available for gnoll player in the D&D world. The Butchers Brood, the Clans of the Blood Hunt, and the Nomad Tribes.

The butchers brood are the clans that worship Yeenoghu to the fullest. From their ranks rise zealots and demon worshipers. They often have yellow fur, stained with blood.

Alignment. *As the butchers brood worship Yeenoghu, they are often chaotic evil, but other alignments are possible for those who sever their connection with demons.

Carrion Eater. *You may eat almost any organic material to survive, and have advantage on saving throws against disease.

Menacing. *You have proficiency in Charisma (Intimidation) checks.

Clans of the Blood Hunt

The Clans of the Blood Hunt are less fanatically devoted to Yeenoghu, but many still pay homage to him as their creator. These gnolls believe that their purpose in life is to hunt, and so they hunt anything that comes near their territory. Years of practice have made them excellent trackers. They often have brown fur, and decorate themselves with bones and trophies.

Alignment. *Although many of the blood hunt are evil, a great many of them are neutral, or at least less mindlessly destructive than other gnolls.

Fast. Your base walking speed is 35 feet.

Tracker. You have advantage on all skill checks to track or follow a creature.

Out of all the groups of gnolls, the Nomad Tribes are the most varied in outlook. Many of them are stouthearted defenders, and noble as any dwarf or dragonborn, and others are so vicious as to almost rival the Butchers Brood. The two things they all have in common are their ability to mimic voices and sounds to an almost perfect degree, and their incredible bravery. The gnolls of the Nomad Tribes are survivors, and so know when to run, and when to fight, but they also have a resistance to fear, magical or otherwise

Alignment. *The Nomad Tribes are the most varied of all gnolls, and so can be of any alignment.

Mimicry. You may cast the sound part of the minor illusion spell as a bonus action, with your only component being verbal. You spellcasting ability for this is Charisma

Bravery. You have advantage on saving throws against the frightened condition. 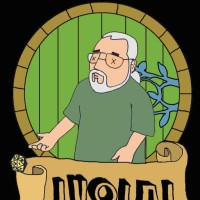